Half a year ago, the Cooperation Manager application was launched, which enables easy and fast direct communication between the storekeeper and his clients, and therefore faster sales of agricultural products. 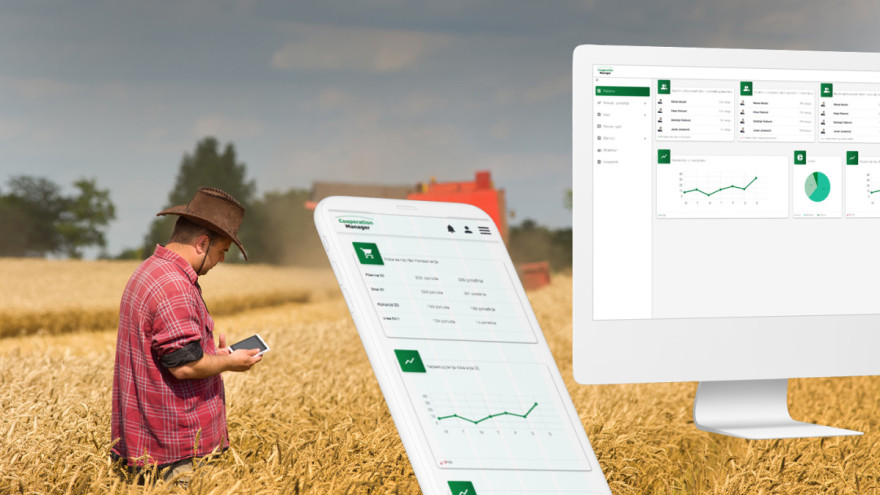 It’s wheat harvest time, and thus the producers’ search for storekeepers and potential buyers. And since the price of agricultural products is variable, it is very important to simply sell the goods at the right time without additional complications.

Cooperation Manager is an application that enables easy and fast direct communication between the storekeeper and his clients – subcontractors and eliminates the costs of traditional communication channels for both parties.

Here you can open the app for iOS iPhone, Android or Huawei operative system.

“It is an excellent tool that accelerated the process of trading and communication with our cooperation partners, and gave me as a director greater control. Today, when we use Cooperation Manager, we use our resources more efficiently, we have made the job of negotiation easier, while on the other side, which is and most importantly, further improved our relationship with farmers,” says the director of the General Agricultural Cooperative “Agronom” Despotova – Pivnice Duško Mijić and adds that everything starts with building a serious cooperation and partnership relationship with each farmer.

Cooperation Manager was founded as a startup company six months ago, and the owners have many years of experience in grain and oilseed trading. Also, one of the co-owners runs an IT company that monitors application development.

Based on that, we created software that accelerates and facilitates the trade of agricultural products between traders, i.e. storekeepers, millers, exporters, processors and their subcontractors – farmers,” says Radoslav Pilja in front of this startup and adds that with this solution in a simple and efficient way enables traders and farmers to access supply and demand data via smartphones.

“What is most noticeable is that our commercialists perform the same work in much less time, which leaves them room to devote themselves to other duties. By using this software, the improvement of results is not only noted by the commercial, but also indirectly by other sectors, such as agronomists, which indirectly increases the satisfaction of subcontractors, and even us as a company,” concluded Mijić.

Implementation of the solution in a few days

At the very beginning, Cooperation Manager had about 15 users, five of which are companies that have a large cooperation, that is, they have a large number of users of the application.

“For now, the users are exclusively storekeepers who have silos and buy cereals, oilseeds, and some of them own agricultural pharmacies,” says Pilja, adding that the implementation of such a solution is possible in a few days if the storekeeper has a proper base of his subcontractors, while for the farmer in completely free because at any moment, with one click, he can see what the conditions of sale are at his storekeeper.

It should be pointed out that the price of posted products is regulated in accordance with the law, and here the storekeeper publishes it through a mobile application. And when it comes to payment, using this app is more than affordable.

“The service is charged in relation to the number of subcontractors who use the application at one warehouse, i.e. 0.35 cents per month per subcontractor, while the use is free for subcontractors-agricultural producers.”

Farmers can expect this kind of service from the best storekeepers. If they want to receive information about the prices of mercantile goods and raw materials, as well as information from security guards at any time, they ask their warehouseman if he has the Cooperation Manager service.

Storekeepers get the app by signing a contract with the Cooperatio Manager, while cooperators get the app solely depending on whether their storekeeper owns it, in which case it’s enough to contact them. Also, the application was developed in 30 languages, that is, the application was made to be able to expand to all European markets, which is one of the conditions of the funds that finance the entire project.

That’s why we asked the question, will there be expansion into the markets of, for example, Bosnia and Herzegovina and Croatia?

“The conditions for other markets, especially if we are talking about the market of the region, are completely similar, given that the conditions and the way of doing business between warehouse owners and subcontractors are similar,” says Pilja.

Cooperation Manager is rapidly working on the further development of the application, and it refers to managing the balance of goods and money for traders, as well as cards for cooperators who will be able to see the available balance of their goods at any time. Also, there is a possibility to connect with some existing application solutions.

The project is financed by the Fund for Innovation Activity from the budget of the Republic of Serbia from the section of the Ministry of Education, Science and  Technological  Development.

About us
Features
Pricing
Case study

This website uses cookies to improve your experience while you navigate through the website. Out of these, the cookies that are categorized as necessary are stored on your browser as they are essential for the working of basic functionalities of the website. We also use third-party cookies that help us analyze and understand how you use this website. These cookies will be stored in your browser only with your consent. You also have the option to opt-out of these cookies. But opting out of some of these cookies may affect your browsing experience.
Necessary Always Enabled
Necessary cookies are absolutely essential for the website to function properly. This category only includes cookies that ensures basic functionalities and security features of the website. These cookies do not store any personal information.
Non-necessary
Any cookies that may not be particularly necessary for the website to function and is used specifically to collect user personal data via analytics, ads, other embedded contents are termed as non-necessary cookies. It is mandatory to procure user consent prior to running these cookies on your website.
SAVE & ACCEPT